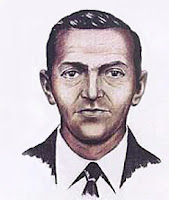 D. B. Cooper is the name attributed to a man who hijacked a Boeing 727 aircraft in the United States on November 24, 1971, received US$200,000 in ransom, and parachuted from the plane. The name he used to board the plane was Dan Cooper, but through a later press miscommunication, he became known as "D. B. Cooper". Despite hundreds of leads through the years, no conclusive evidence has ever surfaced regarding Cooper's true identity or whereabouts, and the bulk of the money has never been recovered. Several theories offer competing explanations of what happened after his famed jump, but the FBI believes he did not survive.

The nature of Cooper's escape and the uncertainty of his fate continue to intrigue people. The Cooper case (code-named "Norjak" by the FBI) is the only unsolved U.S. aircraft hijacking, and one of the few such cases anywhere in the world, along with Malaysia Airlines Flight 653.

The Cooper case has baffled government and private investigators for decades, with countless leads turning into dead ends. As late as March 2008, the FBI thought it might have had a breakthrough when children unearthed a parachute within the bounds of Cooper's probable jump site near the town of Amboy, Washington. Experts later determined that it did not belong to the hijacker.
Read much more
Posted by Jack WB9OTX at Tuesday, November 24, 2009