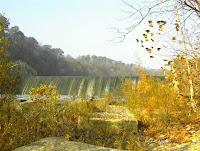 Versailles (pronounced locally as ver-SAYLES) is a Indiana state park, by the town of Versailles, Indiana. The land was given by the National Park Service for use as a state park to Indiana's Department of Conservation in 1943. In the early 20th century, the area was farmland. In the 1930s, the National Park Service acquired the land, and hired the CCC to improve the land into a Recreational Demonstration Area. The 230-acre Versailles Lake was formed in 1954 when a dam was built across Laughery Creek. It is a recreation area, featuring fishing and boating on Versailles Lake and Laughery Creek. A covered bridge, the Busching covered bridge, crosses the creek. This Howe truss bridge was constructed in 1885, is 176 feet long, and although within the state park, Ripley county owns it. A group camp, originally constructed by the CCC, is available for use as well. Swimming isn't allowed in Versailles Lake, but a 25 meter pool, Camping, and a large picnic area is available. Contact the park from: Box 205, U.S. 50, Versailles, IN 47042
812-689-6424 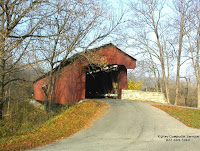 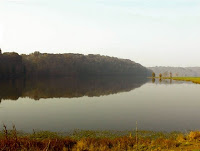 Below:
Versailles Lake, Taken from Fallen Timber.
Posted by Jack WB9OTX at Sunday, May 03, 2009