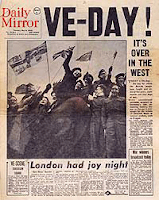 Victory in Europe Day (V-E Day or VE Day) was proclaimed for May 8, 1945, the date when the World War II Allies formally accepted the unconditional surrender of the armed forces of Germany and the end of Adolf Hitler's Third Reich. On April 30th, Hitler committed suicide during the Battle of Berlin, and so the surrender of Germany was authorized by his replacement, President of Germany Karl Dönitz. The administration headed up by Admiral Dönitz was known as the Flensburg government. The act of military surrender was signed on May 7 in Reims, France, and May 8 in Berlin, Germany.
Posted by Jack WB9OTX at Friday, May 08, 2009