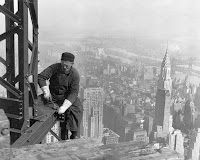 A structural worker bolts beams on the framework during the construction of the Empire State Building in New York City. The 1,250-foot building opened on May 1, 1931, at the time the tallest building in the world, overtaking the Chrysler Building (seen to the right), which had just been completed the year before. The addition of a pinnacle and antennas later increased its overall height to 1,472 feet.
Image credit: Lewis Hine
Click image to inlarge
Posted by Jack WB9OTX at Friday, May 01, 2009