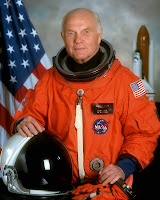 The Mercury-Atlas 6 mission was the first attempt by the U.S. and Mercury program to place an astronaut in orbit. The MA-6 mission was launched on February 20, 1962, from Launch Complex 14 at Cape Canaveral, Florida. The flight used Atlas # 109-D and Mercury spacecraft # 13. The spacecraft was named Friendship 7. It made three earth orbits, piloted by astronaut John Glenn, the first American to orbit the Earth. (The Soviet Union had already placed a cosmonaut, Yuri Gagarin, in orbit on Vostok 1 in April 12, 1961 and Gherman Titov in August 6, 1961)
Posted by Jack WB9OTX at Friday, February 20, 2009