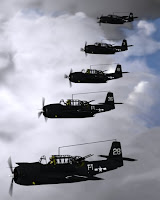 Five Avengers are airborne at 1400 on a bright sunny day. The mission is a routine two-hour patrol from Fort Lauderdale, Fla. due east for 150 miles [241 km], north for 40 miles [64 km] and then return to base. All five pilots are highly experienced aviators and all of the aircraft have been carefully checked prior to takeoff. The weather over the route is reported to be excellent, a typical sunny Florida day. The flight proceeds.

At 1545 Fort Lauderdale tower receives a call from the flight but, instead of requesting landing instructions, the flight leader sounds confused and worried. "Cannot see land," he blurts. "We seem to be off course." "What is your position?" the tower asks.There are a few moments of silence. The tower personnel squint into the sunlight of the clear Florida afternoon. No sign of the flight.
"We cannot be sure where we are," the flight leader announces. "Repeat: Cannot see land."

Contact is lost with the flight for about 10 minutes and then it is resumed. But it is not the voice of the flight leader. Instead, voices of the crews are heard, sounding confused and disoriented, "more like a bunch of boy scouts lost in the woods than experienced airmen flying in clear weather." "We can't find west. Everything is wrong. We can't be sure of any direction. Everything looks strange, even the ocean." Another delay and then the tower operator learns to his surprise that the leader has handed over his command to another pilot for no apparent reason.

Twenty minutes later, the new leader calls the tower, his voice trembling and bordering on hysteria. "We can't tell where we are ... everything is ... can't make out anything. We think we may be about 225 miles [362 km] northeast of base ..." For a few moments the pilot rambles incoherently before uttering the last words ever heard from Flight 19: "It looks like we are entering white water ... We're completely lost."

Within minutes a Mariner flying boat, carrying rescue equipment, is on its way to Flight 19's last estimated position. Ten minutes after takeoff, the PBM checks in with the tower ... and is never heard from again. Coast Guard and Navy ships and aircraft comb the area for the six aircraft. They find a calm sea, clear skies, middling winds of up to 40 miles per hour [64 km/h] and nothing else. For five days almost 250,000 square miles [647,000 km²] of the Atlantic Ocean and Gulf are searched. Yet, not a flare is seen, not an oil slick, life raft or telltale piece of wreckage is ever found.

Finally, after an extensive Navy Board of Inquiry investigation is completed, the riddle remains intact. The Board's report is summed up in one terse statement: "We are not able to even make a good guess as to what happened."
Read the full story From Wikipedia, the free encyclopedia
Here is another account of Flight 19
Posted by Jack WB9OTX at Friday, December 05, 2008