The History of Aspirin 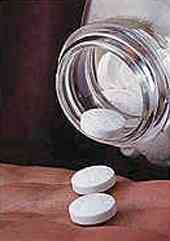 The father of modern medicine was Hippocrates, who lived sometime between 460 B.C and 377 B.C. Hippocrates was left historical records of pain relief treatments, including the use of powder made from the bark and leaves of the willow tree to help heal headaches, pains and fevers.

By 1829, scientists discovered that it was the compound called salicin in willow plants which gave you the pain relief.

According to "From A Miracle Drug" written by Sophie Jourdier for the Royal Society of Chemistry: "It was not long before the active ingredient in willow bark was isolated; in 1828, Johann Buchner, professor of pharmacy at the University of Munich, isolated a tiny amount of bitter tasting yellow, needle-like crystals, which he called salicin. Two Italians, Brugnatelli and Fontana, had in fact already obtained salicin in 1826, but in a highly impure form. By 1829, [French chemist] Henri Leroux had improved the extraction procedure to obtain about 30g from 1.5kg of bark. In 1838, Raffaele Piria [an Italian chemist] then working at the Sorbonne in Paris, split salicin into a sugar and an aromatic component (salicylaldehyde) and converted the latter, by hydrolysis and oxidation, to an acid of crystallised colourless needles, which he named salicylic acid."

Henri Leroux had extracted salicin, in crystalline form for the first time, and Raffaele Piria succeeded in obtaining the salicylic acid in its pure state.

The problem was that salicylic acid was tough on stomachs and a means of 'buffering' the compound was searched for. The first person to do so was a French chemist named Charles Frederic Gerhardt. In 1853, Gerhardt neutralized salicylic acid by buffering it with sodium (sodium salicylate) and acetyl chloride, creating acetylsalicylic acid. Gerhardt's product worked but he had no desire to market it and abandoned his discovery.

Felix HoffmanIn 1899, a German chemist named Felix Hoffmann, who worked for a German company called Bayer, rediscovered Gerhardt's formula. Felix Hoffmann made some of the formula and gave it to his father who was suffering from the pain of arthritis. With good results, Felix Hoffmann then convinced Bayer to market the new wonder drug. Aspirin was patented on March 6, 1889.

The folks at Bayer came up with the name Aspirin, it comes from the 'A" in acetyl chloride, the "spir" in spiraea ulmaria (the plant they derived the salicylic acid from) and the 'in' was a then familiar name ending for medicines.

Aspirin was first sold as a powder. In 1915, the first Aspirin tablets were made. Interestingly, Aspirin and Heroin were once trademarks belonging to Bayer. After Germany lost World War I, Bayer was forced to give up both trademarks as part of the Treaty of Versailles in 1919.

For a scholarly well referenced work on the history of Aspirin, see:
http://www.medicine.mcgill.ca/mjm/v02n02/aspirin.html

All of the above was taken from other Web Pages & eBay
Posted by Jack WB9OTX at Monday, March 27, 2006