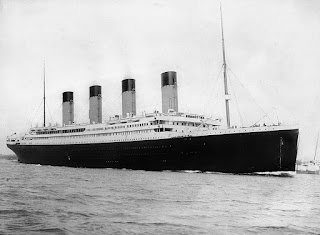 RMS Titanic was a British passenger liner that sank in the North Atlantic Ocean in 1912, after colliding with an iceberg during her maiden voyage from Southampton to New York City. Of the estimated 2,224 passengers and crew aboard, more than 1,500 died, making it one of modern history's deadliest commercial marine disasters during peacetime. RMS Titanic was the largest ship afloat at the time she entered service and was the second of three Olympic-class ocean liners operated by the White Star Line. She was built by the Harland and Wolff shipyard in Belfast. Thomas Andrews, chief naval architect of the shipyard at the time, died in the disaster. Titanic was under the command of Capt. Edward Smith, who also went down with the ship. The ocean liner carried some of the wealthiest people in the world, as well as hundreds of emigrants from Great Britain and Ireland, Scandinavia and elsewhere throughout Europe who were seeking a new life in the United States. The first-class accommodation was designed to be the pinnacle of comfort and luxury, with an on-board gymnasium, swimming pool, libraries, high-class restaurants and opulent cabins. A high-powered radiotelegraph transmitter was available for sending passenger "marconigrams" and for the ship's operational use. Although Titanic had advanced safety features such as watertight compartments and remotely activated watertight doors, it only carried enough lifeboats for 1,178 people—about half the number on board, and one third of her total capacity—due to outdated maritime safety regulations. The ship carried 16 lifeboat davits which could lower three lifeboats each, for a total of 48 boats. However, Titanic carried only a total of 20 lifeboats, four of which were collapsible and proved hard to launch during the sinking.
Read MORE