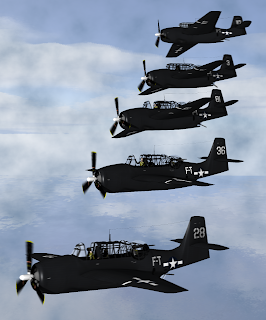 Flight 19 was the designation of a group of five Grumman TBM Avenger torpedo bombers that disappeared over the Bermuda Triangle on December 5, 1945, after losing contact during a United States Navy overwater navigation training flight from Naval Air Station Fort Lauderdale, Florida. All 14 airmen on the flight were lost, as were all 13 crew members of a Martin PBM Mariner flying boat that subsequently launched from Naval Air Station Banana River to search for Flight 19. The PBM aircraft was known to accumulate flammable gasoline vapors in its bilges, and professional investigators have assumed that the PBM most likely exploded in mid-air while searching for the flight. Navy investigators could not determine the exact cause of the loss of Flight 19.
Read the full story  at Wikipedia, the free encyclopedia