Update on my Elecraft KX3 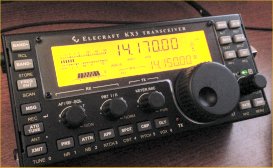 The KX3 is about the size of a small note pad but has many more features that some of my radios that are ten times its size.

After two weeks of the learning curve I am learning how to get the most out of the radio. This beast is very hard to opperate, but once you get by the intense learning curve I must say this is a fantastic radio. I have spent hours looking at and trying to find the correct button and or menu entry. Some buttons with just a momentary push gives a result, but a 1 1/2 second push gives another assignment, then a 3 second push gives another. I must keep the manual or the Nifty book lying next to the tranciever to know what to push. When completely brain dead my good friend Bryan (N8WD) in Ohio gives me the help needed to do what I want to accomplish. If this radio put out 100 watts instead of 15 it would be a king of the Ham Radios. I have found tho 15 watts is normally enough wattage to do the job. A good antenna is a must tho. I have disbelievers on SSB, they tell me I must be running at least 100 watts. On CW I get better reports most of the time than I give out to 100 watt stations. The filtering is be on reproach. The noise blanker works great also. It has a built in voice keyer and 99 memories. There is a computer interface to do many things that would be hard to do with the buttons on the radio. It will take me awhile longer till I can lay the book aside but I will get there in a few more weeks. This is a radio for a young sharp mind but I'm 70 years old and slow. All and all I love this radio and it sure makes Ham Radio fun. I have worked several states on 40 meters, no DX as of yet but that will come in time. I check into the Indiana Traffic Net on 75 meters each morning on SSB with just a few watts sometimes even 5 watts and I have never needed a relay. ..... to be continued. Jack WB9OTX
See the KX3 Web site.
http://www.elecraft.com/KX3/kx3.htm
Posted by Jack WB9OTX at Wednesday, June 01, 2016