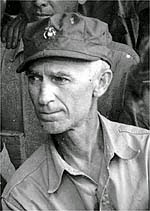 Ernie Pyle Is Killed on Ie Island; Foe Fired When All Seemed Safe
GUAM, April, 18, 1944--Ernie Pyle died today on Ie Island, just west of Okinawa, like so many of the doughboys he had written about. The nationally known war correspondent was killed

Go to obituary  from the THE NEW YORK TIMES