3/19/1954 – American pool (pocket billiards) player Willie Mosconi set a record of 526 consecutive balls sunk without a miss during an exhibition of straight pool. 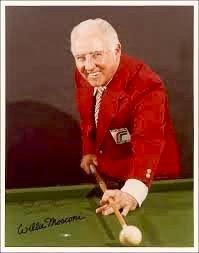 William Joseph Mosconi (/mɒsˈkoʊni/; June 27, 1913 – September 17, 1993), generally known as Willie Mosconi, was an American professional pool (pocket billiards) player from Philadelphia, Pennsylvania. Between the years of 1941 and 1957, he won the World Straight Pool Championship an unmatched fifteen times. For most of the 20th century, his name was essentially synonymous with pool in North America – he was nicknamed "Mr. Pocket Billiards" – and he was among the first Billiard Congress of America Hall of Fame inductees, Mosconi pioneered and regularly employed numerous trick shots, set many records, and helped to popularize pool as a national recreation activity.
Read More

From Wikipedia, the free encyclopedia
Posted by Jack WB9OTX at Wednesday, March 19, 2014