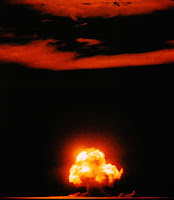 The Manhattan Project was a research and development project that produced the first atomic bombs during World War II. It was led by the United States with the support of the United Kingdom and Canada. From 1942 to 1946, the project was under the direction of Major General Leslie Groves of the US Army Corps of Engineers. It began modestly in 1939, but grew to employ more than 130,000 people and cost nearly US$2 billion (the equivalent of about $26 billion now). Although it operated under a tight blanket of security, it was penetrated by Soviet atomic spies. The first device ever detonated was an implosion-type nuclear weapon in the Trinity test (pictured), conducted at New Mexico's Alamogordo Bombing and Gunnery Range on 16 July 1945. Project personnel participated in the Alsos Mission in Europe, and in the bombing of Hiroshima and Nagasaki. After the war the Manhattan Project conducted weapons testing in Operation Crossroads, developed new weapons, established the network of national laboratories, supported medical research into radiology, and laid the foundations for a nuclear navy. It was replaced by the Atomic Energy Commission and the Armed Forces Special Weapons Project in 1947
Read More