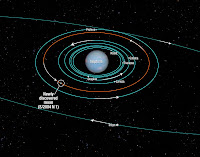 Mark Showalter of the SETI Institute discovered S/2004 N 1 in July 2013 when examining Hubble Space Telescope (HST) images of Neptune's ring arcs from 2009 using a technique similar to panning to compensate for orbital motion. On 1 July 2013, after deciding "on a whim" to expand the search area to radii well beyond the rings, he found the "fairly obvious dot" that represented the new moon.  He then found the satellite in other archival HST images going back to 2004. Voyager 2, which had observed all of Neptune's other inner satellites, did not detect the moon during its 1989 flyby, due to its dimness.[4] Given that the discovery images have long been available to the public, the moon could have been found by anyone. S/2004 N 1 is the fourteenth known moon of Neptune, and the first Neptunian moon discovery to be announced
since September 2003.
Read More
Posted by Jack WB9OTX at Thursday, July 18, 2013