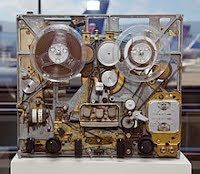 The first Video recorder I ever seen was at the Cincinnati Ham Radio Fest, this was in the early 60s. I thought how neat it would be to have one to record TV shows from your home. Not long you could own one. There was two formats, Bata and VHS. Bata was the best but the power of advertising made the VHS format the standard. As I remember, the cost of these early machines was about $300. DVD recorders have taken the VCRs just about out of the market. If you can find a VHS recorder they are selling for under $50. Here is a little history of audio and video recorders from Ampex:
Ampex Model 200, revolutionized the radio and recording industries. In 1948, ABC used an Ampex Model 200 audio recorder using 3MScotch 111 gamma ferric oxide coated acetate tape for the first-ever U.S. broadcast delayed radio broadcast of The Bing Crosby Show.
http://en.wikipedia.org/wiki/Ampex
Posted by Jack WB9OTX at Tuesday, May 29, 2012