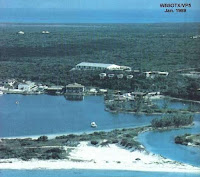 In 1989 the economy was better and the January weather was bad here in Indiana. Three Ham Radio operators and I traveled to Provo Island located in the Turks & Caicos Island chain in the warm beautiful Caribbean. Coop met us at the airport with a warm hand shake and a tour of the Island ending at our small but aetiquette chalet overlooking the ocean at 100 foot resting on the edge of a shire cliff. Coop had made all the arrangements for our stay. This was a Ham Radio dream that included a 3 element triband antenna, a 5 band vertical, and dipoles. Our group worked thousands of stations in all parts of the world. What a fun place. Coop was like a king on the Island. As we passed in his SUV people would wave and cheer. I talked to a few natives and they all said we love coop, he brings us radio and TV. We visited his studio (head end) where he transmitted radio from, it was a mess that looked as if a Ham had constructed it, but everything worked perfect. Coop has a web page where you can learn more about him at: http://bobcooper.tv/ and this about Provo: http://www.portobelloonebook.com/
Jack VP5/wb9otx
Below is from his page.
Robert B. "Coop" Cooper Jr. is one of the unsung heros of the CATV industry. During his career, he has been an amateur radio operator, RF engineer, CATV equipment manufacturer, association CEO-by-default, journalist, videographer, novelist, and CATV system operator. As an RF engineer and equipment manufacturer, he founded and ran CADCO, the Community Antenna Development Company, an early manufacturer of CATV headend and distribution equipment. As a journalist, he has been an effective voice on behalf of small CATV operators and the home satellite community, documenting industry news with pointed political analysis and detailed technical explanations. As a CATV operator, he built and operated several 12-channel systems in California during 1960s, at a time when solid-state amplifiers were just being introduced.He now owns Far North Cablevision, in Mangonui, New Zealand.
Posted by Jack WB9OTX at Tuesday, February 07, 2012