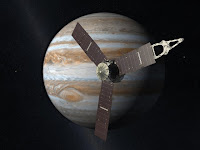 The spacecraft Juno launched from the Kennedy Space Center on August 5, 2011. Carries three LEGO figurines representing Galileo, the Roman god Jupiter and his wife Juno. In Roman mythology, Jupiter drew a veil of clouds around himself to hide his mischief. From Mount Olympus, Juno was able to look into the clouds and reveal her husband's real nature. Juno holds a magnifying glass as a sign for searching for the truth and her husband holds a lightning bolt. The third LEGO crew member, Galileo Galilei, has his telescope with him on the journey.
Read the full story:
http://en.wikipedia.org/wiki/Juno_%28spacecraft%29
Posted by Jack WB9OTX at Sunday, August 07, 2011