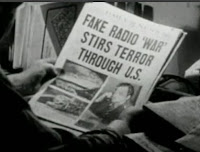 The first two thirds of the 60-minute broadcast was presented as a series of simulated news bulletins, which suggested to many listeners that an actual Martian invasion was in progress. Compounding the issue was the fact that the Mercury Theatre on the Air was a 'sustaining show' (i.e., it ran without commercial breaks), thus adding to the dramatic effect. Although there were sensationalist accounts in the press about a suppo

sed panic, careful research has shown that while thousands were frightened, there is no evidence that people fled their homes or otherwise took action. The news-bulletin format was decried as cruelly deceptive by some newspapers and public figures, leading to an outcry against the perpetrators of the broadcast, but the episode launched Welles to fame.
<<<<<<<<<<<<<<<<<<<<<*>>>>>>>>>>>>>>>>>>>>
Download the broadcast (big MP3 file)
Everything you ever wanted to know about the broadcast is at WikipediA:

This is a classic that I play every year, I love it!
Posted by Jack WB9OTX at Saturday, October 30, 2010