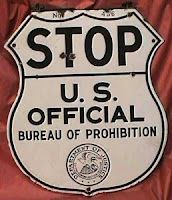 The "Volstead Act", the popular name for the National Prohibition Act, passed through Congress over President Woodrow Wilson's veto on October 28, 1919 and established the legal definition of intoxicating liquor. Though the Volstead Act prohibited the sale of alcohol, it did little to enforce the law. By 1925, in New York City alone, there were anywhere from 30,000 to 100,000 speakeasy clubs.
Read More