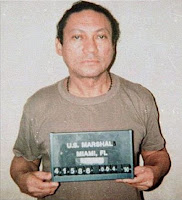 Manuel Antonio Noriega (born February 11, 1934)[1] is a former US backed general and the military dictator of Panama from 1983 to 1989.[2] He was never, contrary to popular belief, officially the president of Panama, but held the post of "chief executive officer" for a brief period in 1989. The 1989 invasion of Panama by the United States removed him from power; he was captured, detained as a prisoner of war, and flown to the U.S. Noriega was tried on eight counts of drug trafficking, racketeering, and money laundering in April 1992. Noriega's US prison sentence ended in September 2007;[3] pending the outcome of extradition requests by both Panama and France, he remains in prison as of 2010.