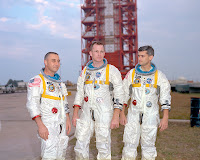 Apollo/Saturn 204 (AS-204) mission. Its command module (CM-012) was destroyed by fire during a test and training exercise on January 27, 1967 at Pad 34 (Launch Complex 34, Cape Canaveral, then known as Cape Kennedy) atop a Saturn IB rocket. The crew aboard were the astronauts selected for the first manned Apollo program mission: Command Pilot Virgil I. "Gus" Grissom, Senior Pilot Ed White and Pilot Roger B. Chaffee. All three died in the fire.

Although the ignition source of the fire was never conclusively identified, the astronauts' deaths were attributed to a wide range of lethal design hazards in the early Apollo command module. Among these were the use of a high-pressure 100 percent-oxygen atmosphere for the test, wiring and plumbing flaws, flammable materials in the cockpit (such as Velcro), an inward-opening hatch that would not open in this kind of an emergency, and the flight suits worn by the astronauts.