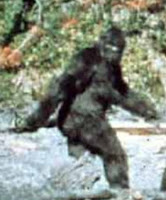 The Patterson-Gimlin film (also referred to as simply the Patterson film) is a short motion picture of an unidentified subject filmed on October 20, 1967 by Roger Patterson (Wall, South Dakota, February 14, 1926 – January 15, 1972) and Robert Gimlin (Missouri, October 18, 1931) who claimed the film was a genuine recording of a bigfoot. The film has been subjected to many attempts both to debunk and authenticate it. Some qualified scientists have judged the film a hoax with a man in an ape suit, but other scientists contend the film depicts an animal unknown to science, or cryptid, claiming it would be virtually impossible for a human to replicate the subject's gait and muscle movement.

Both men have always dismissed allegations that they had hoaxed the footage by filming a man wearing an ape suit; in fact, Patterson, who died of cancer in 1972, swore on his death bed that the footage was authentic and he had encountered and filmed a large bipedal animal unknown to science. Patterson's friend and business associate, Gimlin, has always denied being involved in any part of a possible hoax with Patterson and claims that he and his partner had encountered a real bigfoot. However, Gimlin avoided publicly discussing the subject from at least the early 1970s until about the year 2000 when he began giving interviews and making appearances at Bigfoot conferences.
Posted by Jack WB9OTX at Tuesday, October 20, 2009