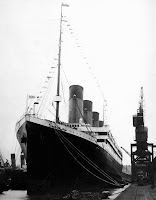 On the night of 14 April 1912, during her maiden voyage, Titanic hit an iceberg and sank two hours and forty minutes later, early on 15 April 1912. The sinking resulted in the deaths of 1,517 people, making it one of the most deadly peacetime maritime disasters in history. The high casualty rate was due in part to the fact that, although complying with the regulations of the time, the ship did not carry enough lifeboats for everyone aboard. The ship had a total lifeboat capacity of 1,178 people even though her maximum capacity was 3,547 people. A disproportionate number of men died also, due to the women-and-children-first protocol that was followed.
Read the full story
Posted by Jack WB9OTX at Tuesday, April 14, 2009