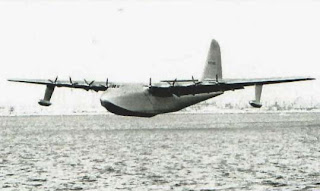 H-4 (HK-1) Hercules
After the first two uneventful taxi runs, four reporters left to file stories but the remaining press stayed for the final test run of the day. After picking up speed on the channel facing Cabrillo Beach near Long Beach, the Hercules lifted off, remaining airborne 70 feet off the water at a speed of 135 mph for around a mile At this altitude, the aircraft was still experiencing ground effect.

Hughes had answered his critics and the hearings ended, but the aircraft never flew again, and to this day it is not clear whether the aircraft was really airworthy. Hughes himself had his doubts. The aircraft was maintained in flying condition until Hughes' death in 1976.
Read more
Posted by Jack WB9OTX at Sunday, November 02, 2008