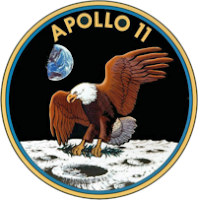 The Apollo 11 mission was the first manned mission to land on the Moon. It was the fifth human spaceflight of Project Apollo and the third human voyage to the Moon. Launched on July 16, 1969, it carried Commander Neil Alden Armstrong, Command Module Pilot Michael Collins and Lunar Module Pilot Edwin Eugene 'Buzz' Aldrin, Jr. On July 20, Armstrong and Aldrin became the first humans to land on the Moon, while Collins orbited above.

The mission fulfilled President John F. Kennedy's goal of reaching the moon by the end of the 1960s, which he expressed during a 1961 speech:

"I believe that this nation should commit itself to achieving the goal, before this decade is out, of landing a man on the Moon and returning him safely to the Earth."