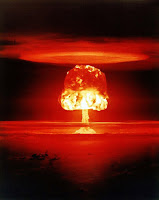 The Manhattan Project was the project to develop the first nuclear weapon (atomic bomb) during World War II by the United States, the United Kingdom, and Canada. Formally designated as the Manhattan Engineer District (MED), it refers specifically to the period of the project from 1941–1946 under the control of the U.S. Army Corps of Engineers, under the administration of General Leslie R. Groves.

The project's roots lay in scientists' fears since the 1930s that Nazi Germany was also investigating nuclear weapons of its own. Born out of a small research program in 1939, the Manhattan Project eventually employed more than 130,000 people and cost nearly $2 billion USD ($24 billion in 2008 dollars based on CPI). It resulted in the creation of multiple production and research sites that operated in secret.

The three primary research and production sites of the project were the plutonium-production facility at what is now the Hanford Site, the uranium-enrichment facilities at Oak Ridge, Tennessee, and the weapons research and design laboratory, now known as Los Alamos National Laboratory. Project research took place at over thirty sites across the United States, Canada, and the United Kingdom. The MED maintained control over U.S. weapons production until the formation of the Atomic Energy Commission in January 1947.