What ever happened to Will Rogers ? 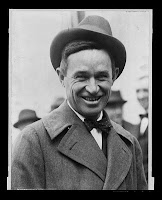 In 1935 Wiley Post became interested in surveying a mail-and-passenger air route from the West Coast of the United States to Russia. Short on cash, he built a plane using parts salvaged from two different aircraft: The fuselage of an airworthy Lockheed Orion and the wing of a wrecked experimental Lockheed Explorer. The Explorer wing was six feet longer in span than the Orion's original wing, an advantage which extended the hybrid aircraft's range. As the Explorer wing did not have retractable landing gear, it also lent itself to the fitting of floats for landing in the lakes of Alaska and Siberia. Post's friend Will Rogers visited him often at the airport in Burbank, California while he was building the aircraft, and asked Post to fly him through Alaska in search of new material for his newspaper column. When the floats Post had ordered did not arrive at Seattle in time, he used a set that was designed for a larger plane, making the already nose-heavy hybrid aircraft still more nose-heavy. (One source has stated that the floats were the correct type for the aircraft.)

After making a test flight in July, Post and Rogers left Seattle in the plane in early August. While Post piloted the plane, Rogers wrote his columns on his typewriter. On August 15 they left Fairbanks, Alaska for Point Barrow. They were a few miles from Point Barrow when they became uncertain of their position in bad weather and landed in a lagoon to ask directions. The engine failed on take off, at low altitude, and the aircraft, uncontrollably nose-heavy at low speed, plunged into the lagoon, shearing off the right wing and ending inverted in the shallow water of the lagoon. Both men died instantly. Read More about Will Rogers or Wiley Post

Above text from:
http://en.wikipedia.org/wiki/Main_Page
Posted by Jack WB9OTX at Monday, June 23, 2008