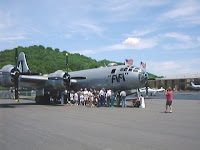 Two new videos have been added to my latest video page. The first was video taped several years ago at Lunken airport It shoes a B-29 with nose art "FiFi, the other plane is a B-24 "Lil". This was an exciting day for me as I was able to tour the inside of both planes an even set in the pilot's seat. The second video is from ZDTV. This was a cable/satellite program dedicated to computers. Sadly it is now off the air. The show that is featured in this video was called "The Screen Savers", I did a short promo via V-mail. The quality is very poor by todays standards , but on a dial-up and 64 meg video card it was state of the art for the time. This was in the the early 90s . See both at:
http://wb9otx.com/youtube/
Posted by Jack WB9OTX at Monday, June 09, 2008