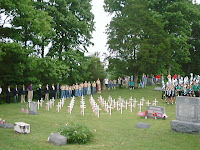 Memorial Day is a United States Federal Holiday that is observed on the last Monday of May (observed in 2008 on May 26). It was formerly known as Decoration Day. This holiday commemorates U.S. men and women who have died in military service to their country. It began first to honor Union soldiers who died during the American Civil War. After World War I, it was expanded to include those who died in any war or military action. One of the longest standing traditions is the running of the Indianapolis 500, which has been held in conjunction with Memorial Day since 1911. It is also traditionally viewed as the beginning of summer by many, since many schools are dismissed around Memorial Day. From:
http://en.wikipedia.org/wiki/Memorial_Day

Each Memorial Day starting at 10am services are held at Cliff Hill Cemetery, Versailles, Indiana. Veterans march from the Legion Post to the grave yard for a short service. A 21 gun salute is performed at the graveyard then at the Veterans memorial monument at the Versailles town square. See a short video of the service at Ciff Hill 2007.
http://youtube.com/watch?v=iByIn7asYq4
Here are a few photos of this years activities (2008) More to be added on Monday.
http://picasaweb.google.com/jack.demaree/MemorialDay08