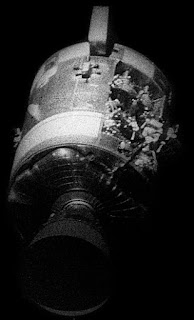 Apollo 13 was the seventh crewed mission in the Apollo space program and the third meant to land on the Moon. The craft was launched from Kennedy Space Center on April 11, 1970, but the lunar landing was aborted after an oxygen tank in the service module failed two days into the mission.
from: Wikipedia
Read the full story
Posted by Jack WB9OTX at Tuesday, April 13, 2021