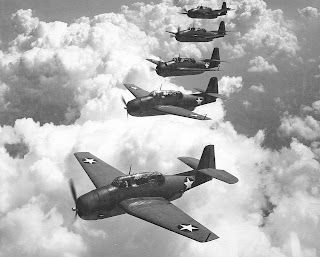 READ MORE
It began as nothing more than a routine training flight. At 2:10 p.m. on December 5, 1945, five TBM Avenger torpedo bombers took off from a Naval Air Station in Ft. Lauderdale, Florida. The planes—collectively known as “Flight 19”—were scheduled to tackle a three-hour exercise known as “Navigation Problem Number One.” Their triangular flight plan called for them to head east from the Florida coast and conduct bombing runs at a place called Hens and Chickens Shoals. They would then turn north and proceed over Grand Bahama Island before changing course a third time and flying southwest back to base. Save for one plane that only carried two men, each of the Avengers was crewed by three Navy men or Marines, most of whom had logged around 300 hours in the air. The flight’s leader was Lieutenant Charles C. Taylor, an experienced pilot and veteran of several combat missions in World War II’s Pacific Theater.
Posted by Jack WB9OTX at Tuesday, December 01, 2020