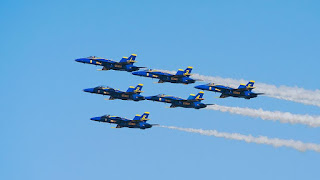 Fleet Week is a United States Navy, United States Marine Corps, and United States Coast Guard tradition in which active military ships recently deployed in overseas operations dock in a variety of major cities for one week. Once the ships dock, the crews can enter the city and visit its tourist attractions. At certain hours, the public can take a guided tour of the ships. Often, Fleet Week is accompanied by military demonstrations and air shows such as those provided by the Blue Angels.
Read More
Posted by Jack WB9OTX at Wednesday, May 22, 2019