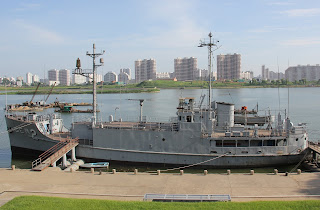 USS Pueblo, still held by North Korea today, officially remains a commissioned vessel of the United States Navy. Since early 2013, the ship has been moored along the Potong River in Pyongyang, and used there as a museum ship at the Pyongyang Victorious War Museum. Pueblo is the only ship of the U.S. Navy still on the commissioned roster currently being held captive.
Read the full story