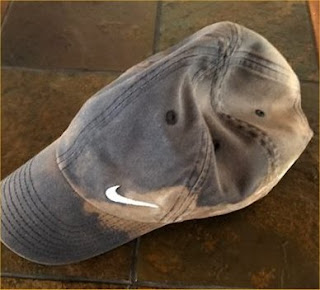 Sherry Graham-Potter is the surviving spouse of Pima County, Ariz., Sheriff’s Deputy Tim Graham. In 2005, Deputy Graham was struck and killed by an oncoming vehicle as he grappled with an emotionally disturbed man on a highway.

Graham-Potter’s letter to Nike tells the story of how she worked through her grief, how a Nike cap came to be a symbol of the “strength and the sacrifice” of a loving husband who gave his life in the line of duty, and how Nike’s decision to make a cop-hating man who hasn’t sacrificed anything the face of their brand is “terribly, terribly wrong.”

On August 10, 2005, I was a newlywed with two young sons. My husband Tim and I had toasted our one month anniversary the night before, and I was enjoying a rare evening to myself, catching up on reading and relishing the quiet. Until there was a knock on my door. I had no way of knowing that the small act of turning a knob was about to shatter my life into a million pieces. I sat numb and in sheer disbelief as I was told that my husband, while in a foot pursuit and subsequent struggle with a suspect that ended up in the road, had been struck and killed by an oncoming vehicle. He took his last breath lying in the middle of the street. What I lost in that moment is indescribable. I had to watch his mother be dealt the most agonizing blow a parent can face, and I couldn’t comfort her because I was in my own hell. I had to find a way to gut my own children in the gentlest way possible, and tell them that this man they had come to love, who they looked up to, who cared for them as his own, would never walk through our door again.

I don’t know if you’ve ever attended a police funeral, but watching grown men who’ve seen the absolute worst things a civilian can imagine, break down and sob over the casket of their brother is an image that never leaves you. The bagpipes haunt my dreams to this day, but it was the faces of my children, the innocence that abandoned them at such a tender age that brought me to my knees.

I had no choice but to move on. We trudged zombie-like through our days for weeks and weeks on end. I never left the house except to drive the boys to school, or buy food we barely touched. I realized that I had to do something. I had to move my body or I was going to crawl out of my own skin. So I put on the only cap I had and I went for a run. It was short, it hurt and it was ugly. But I felt, just for those few moments on that road, like a normal person. So I kept doing it. I put that hat on and I ran every day. Sometimes I had to stop and sit down because I was sobbing so hard. Sometimes I was so angry I ran until I thought I my heart would stop, sometimes I would just scream over and over again, but it still felt better than doing nothing.

That black cap became a symbol to me, it is sweat stained and it’s shape is gone, the buckle in the back barely closes; but that hat represents my family’s rise from the ashes. It stands for the strength and the sacrifice we made loving a man who had a job that we all knew could end his life, every time he walked out that door. And it did. And I accept that.

I still wear this hat, I wore it on my run this morning.
And then I heard about your new ad campaign.

Colin Kapernick has the absolute right to protest anything he damn well pleases. I don’t dispute that for one second. My father, my husband and many, many friends have all served this country and were willing to fight for his right to kneel.
But that right goes both ways. I also have a right to express my disgust at your decision to portray him as some kind of hero. What, exactly has Colin Kapernick sacrificed? His multi million dollar paycheck…? Nope, you already gave him one of those. His reputation? No, he’s been fawned over by celebrities and media alike. Funny, Tim Tebow was never called courageous when he knelt.
This man, whose contempt for law enforcement fits him like a…sock, has promoted an agenda that has been proven false time and time again, in study after study. But facts don’t seem to matter anymore. This man has thrown his support behind divisive anti-police groups, and donated money directly to a fugitive from justice who escaped prison after killing a police officer. I question the judgement of anyone who would put someone this controversial and divisive at the head of an advertising campaign, but it isn’t my company to run.

I don’t know if I’ll have he heart to ever get rid of this cap, but I will tell you this, I’ll never purchase another Nike product as long as I live. You got this one wrong Nike, terribly, terribly wrong.