The building of a 40 meter phased array @ WB9OTX 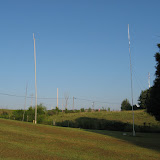 It has been a much larger and much more time consuming than I had thought and did I mention more expensive. What Ham Radio operators will do for only 3 db of antenna gain. Keep checking as time passes. Many more photos will be added. ..... Jack WB9OTX
*** click the photo to see the progress. 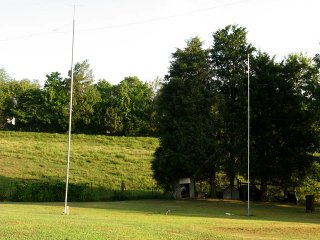 The bands have been very poor sense I have had it operational but I still have worked a few Europeans and some from South America. I did manage to work a VK (Australia) and tons of stateside, both East and West coast stations on JT65. I usually get lower signal reports than I give out but I have been running only 5 watts. I'll hook up the TS-590 and run the power up a little. I have not tried any SSB QSOs as yet but that will come soon when the band improves.
----------------


The replacement of the old three inch diameter 30 ft. tall irrigation tubing (SW antenna) has began. It was un-tunable and the radial (60) wires needed re-worked. The new one has all stainless hardware and should last longer than I. This one has a tilt over mount so it is much easer to install the 34 foot aluminum vertical element. Most of the radial wires must be lengthened about 6 inches to attach to the new grounding plate. This involves alot of soldering. The temperature has been over 90 degrees each day so I have only been working on it a few hours in the cooler morning hours. Stay tuned .... Jack

The Nightmare is over

Today I connected all 120 radials to the grounding plate.  adjusted the element on antenna 2 to match the antenna 1. Because of a almost nothing bend in the 2nd to bottom pipe I had to cut off about 2.5 foot, but that was OK as it was too long anyway. The reading came to 36 Ohm and the SWR read 1.3.5:1 almost perfect. At the transmitter 90 feet away the SWR reads about 1.03:1 why ? I don't know as it should read the same as at the antenna. Both antennas with a tee connector reads 46 ohms and this is what it should be (perfect). On the air testing shows when looking NE S-0.5, when looking SW S-6 from the power line noise. In the non-directional position it reads about S-5. It is 4PM and not much is happening on 40 meters so the final test will come tonight. I am looking at Europe at about 9PM and in the morning at 6 or 7AM Australia or New Zealand. The gain of the system is only 3DB, so you can't expect too much but at 3DB gain you can expect doubling your power (100 = 200).

This has been a very fun and educational project with lots of book reading and work putting it together. It was much more costly than I had thought but it will out live me and that's for sure. Isn't Ham Radio fun??? ... Jack WB9OTX