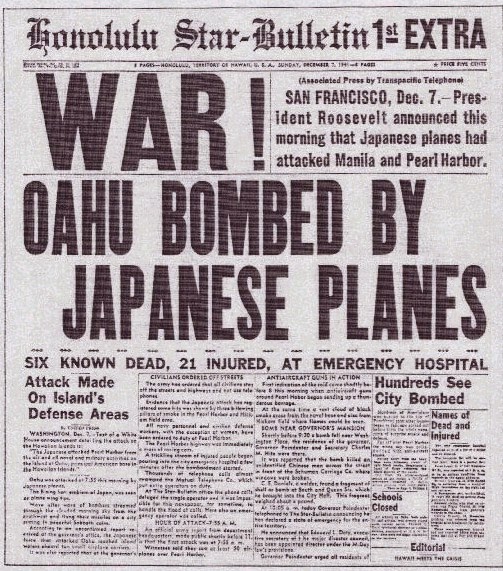 The Presidential Address to Congress on December 8, 1941. Known as the Infamy Speech, it was delivered at 12:30 p.m. that day to a Joint Session of Congress by United States President Franklin D. Roosevelt, one day after the Empire of Japan's attack on Pearl Harbor Naval Base, Hawaii. Roosevelt famously describes the previous day as "a date which will live in infamy."


On the morning of December 7, 1941, Japanese planes thundered over Hawaii, dropping bombs in an unprovoked act of war against the United States.The attack claimed the lives of more than 2,400 Americans.It nearly destroyed our Pacific Fleet, but it could not shake our resolve.While battleships smoldered in the harbor, patriots from across our country enlisted in our Armed Forces, volunteering to take up the fight for freedom and security for which their brothers and sisters made the ultimate sacrifice.On National Pearl Harbor Remembrance Day, we pay tribute to the souls lost 73 years ago, we salute those who responded with strength and courage in service of our Nation, and we renew our dedication to the ideals for which they so valiantly fought.
Read More
http://tinyurl.com/q94sufm
Posted by Jack WB9OTX at Saturday, December 06, 2014