Purple Martins - where did they go ?

I have noticed the numbers of Martins here in South East Indiana have declined in the past few years. I went looking for a reason but found none. Here is some interesting information that I did find. You can read more HERE 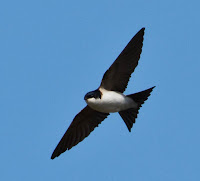 The Common House Martin, sometimes called the Northern House Martin or, Purple Martin, is a migratory passerine bird of the swallow family which breeds in Europe, north Africa and temperate Asia; and winters in sub-Saharan Africa and tropical Asia. It feeds on insects which are caught in flight, and it migrates to climates where flying insects are plentiful. It has a blue head and upperparts, white rump and pure white underparts, and is found in both open country and near human habitation. Both the scientific and colloquial name of the bird are related to its use of human-made structures. It builds a closed cup nest from mud pellets under eaves or similar locations on buildings usually in colonies, and sometimes fouling below nests can be a problem. It is hunted by the Eurasian Hobby (Falco subbuteo), and like other birds is affected by internal parasites and external fleas and mites, although its large range and population mean that it is not threatened globally. Its proximity to humans has resulted in some cultural and literary references.