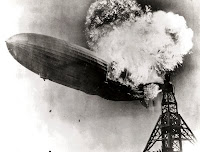 The Hindenburg's arrival on May 6 was delayed for several hours to avoid a line of thunderstorms passing over Lakehurst, but around 7:00 pm the airship was cleared for its final approach to the Naval Air Station, which it made at an altitude of 650 ft (200 m) with Captain Max Pruss at the helm. Four minutes after ground handlers grabbed hold of a pair of landing lines dropped from the nose of the ship at 7:21 pm, the Hindenburg suddenly burst into flames and dropped to the ground in just 37 seconds.
Read more