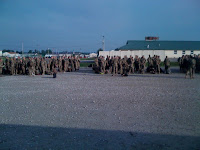 Among my first memories as a little kid was being on Camp Atterbury to pick my dad up when he returned from Japan. Today, after a nice lunch at an Italian restaurant in Columbus, we worked a USO shift at the same base and then saw 275 troops off on their deployment to Afghanistan. We three old guys who were with the USO made somewhat of a representation for the fathers of these kids. Not a bad way to spend Fathers' Day. One elderly bald 6'6" NCO told me that this was his fourth deployment. Wow! Remember Winston Churchill's statement, "Never have so few done so much for so many."
Click image to inlarge
Posted by Jack WB9OTX at Monday, June 20, 2011