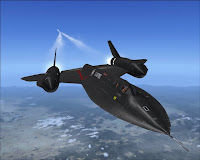 The Lockheed SR-71 is an advanced, long range, Mach 3 strategic reconnaissance aircraft developed from the Lockheed A-12 and YF-12A aircraft by the Lockheed Skunk Works as a Black project. The SR-71 was unofficially named the Blackbird, and called the Habu by its crews, referring to an Okinawan species of pit viper. Clarence "Kelly" Johnson was responsible for many of the design's innovative concepts. A defensive feature of the aircraft was its high speed and operating altitude, whereby, if a surface-to-air missile launch were detected, standard evasive action was simply to accelerate. The SR-71 line was in service from 1964 to 1998, with 12 of the 32 aircraft being destroyed in accidents, though none were lost to enemy action.
Posted by Jack WB9OTX at Tuesday, December 22, 2009