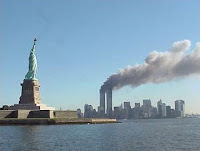 The September 11 attacks (often referred to as September 11th or 9/11) were a series of coordinated suicide attacks by Al-Qaeda upon the United States on September 11, 2001. On that morning, 19 Al-Qaeda terrorists hijacked four commercial passenger jet airliners. The hijackers intentionally crashed two of the airliners into the Twin Towers of the World Trade Center in New York City, killing everyone on board and many others working in the buildings. Both buildings collapsed within two hours, destroying nearby buildings and damaging others. The hijackers crashed a third airliner into the Pentagon in Arlington, Virginia, just outside of Washington, D.C. The fourth plane crashed into a field near Shanksville in rural Pennsylvania, after some of its passengers and flight crew attempted to retake control of the plane, which the hijackers had redirected toward Washington, D.C. There were no survivors from any of the flights.
Read More
Posted by Jack WB9OTX at Friday, September 11, 2009