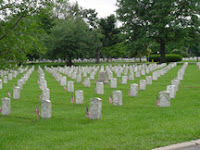 Memorial Day is a United States federal holiday that is observed on the final Monday of May (observed this year on 2007-05-28). It was formerly known as Decoration Day. This holiday commemorates U.S. men and women who have died in military service to their country. It began first to honor Union soldiers who died during the American Civil War. After World War I, it expanded to include those who died in any war or military action. from: http://en.wikipedia.org/wiki/Memorial_Day

He was a veteran of WWII and was Ripley County’s most decorated veteran.
Herman W. Jahnigen, 87, 1918 - 2005 of Versailles passed away Monday, May 23, 2005 He was a member of the 508th Parachute Infantry of the 82nd Airborne Division and participated in the D-Day landing at Normandy. He also participated in the Battle of the Bulge and was wounded on June 9, 1944 in the European Theatre. Mr. Jahnigen’s citations included the Purple Heart, Bronze Star, Silver Star, European Campaign Medal, Victory Medal, Good Conduct Medal, Distinguished Unit Citation, French Fourragere, Netherlands Citation, and the Normandy, Belgium, French, and American Defense Medals. On June 27, 1945 he received a battlefield commission promoting him to Lieutenant.

Please see a video tribute to Herman Jahnigen at:
http://www.ripleycounty.net/herman/herman.html

Let us remember Herman, but please remember all the veterans that have served to give us the freedoms we now enjoy in our everyday life. You may, and should, attend the services at Cliff Hill Cemetery, Versailles, Indiana, Monday 10:00 AM May 28 2007 - Contact Versailles Legion Post # 173 at 812-689-6400 for information.


I want to add this final note today to the readers of this Blog. I may to some think that I go overboard on the subjects of Veterans, Memorial Day, Veteran's Day and the like, but I feel you can not give enough to these people that gave of themselves for you and I. When I see a flag in a grave yard, see the colors in a parade, or see a tribute to Veterans a tear trickles from my eyes. This in the past use to embarrass me. Now I feel it is the very least I can do, and this is not nearly enough. Now I am proud to wipe the tear.
Jack Demaree
Posted by Jack WB9OTX at Friday, May 25, 2007